Thanks to millions in grants and the launch of a new taskforce, fewer Michiganders will have to resort to library parking lots for free wifi access.

LANSING, Mich.—The coronavirus pandemic has brought to light many disparities throughout Michigan’s communities, including a new group of haves and have-nots: Families who can stay connected, and those who struggle to.

The digital divide can be felt in communities like Leland Township, a small coastal town on Lake Michigan where it meets the Carp River.

“For our region, it’s a lack of internet [access] to the home,” Leland Township Library Director Mark Morton told The ‘Gander. “Cable only goes so far, and with our hilly topography, the fixed wireless isn’t available for everybody.”

Morton further explained that homes that do have internet access in the northeastern Michigan community (think, pinky finger in The Mitten) are often relegated to slow speeds and dial-up connections.

Approximately 1.2 million Michigan households do not have a permanent fixed broadband connection. The state estimates that to be up to $2.7 billion in potential economic benefit that these households never realized due to their lack of connectivity.

In Leland, the public library offers free wifi that extends into the parking lot. They understand what a precious resource connectivity is during the pandemic.

“It’s on 24 hours a day,” Morton said. “So even if the library is closed, people can still come up in their car and get fast internet access.”

But oftentimes the internet is needed right inside the home.

That’s the case for families like the Clark’s, where Wesley, 84, and his wife, Janet, 79, live in a rural community near Lansing. The couple doesn’t have home internet access, and can’t connect with Weley’s doctor for the preferred video telehealth chat.

Janet now has to communicate with physicians via phone, according to the Detroit Free Press. The option does not allow for face-to-face interaction with their family physician, even if only virtually.

DON’T MISS: Want to Help Your Neighbors in Michigan? There’s an App for That.

Experts say the digital divide is more apparent than ever with more people using socially distanced connection options to help slow the spread of the coronavirus—especially as a third wave has Michigan cases spiking again.

And it’s not just happening in rural areas, but metropolitan communities, too.

Connected Nation is a nonprofit that works to map and extend access to broadband internet. Jessica Denson, communication director for the Michigan branch of the organization says one of the pandemic’s silver linings could be a “shift in the understanding of why broadband access is important.” 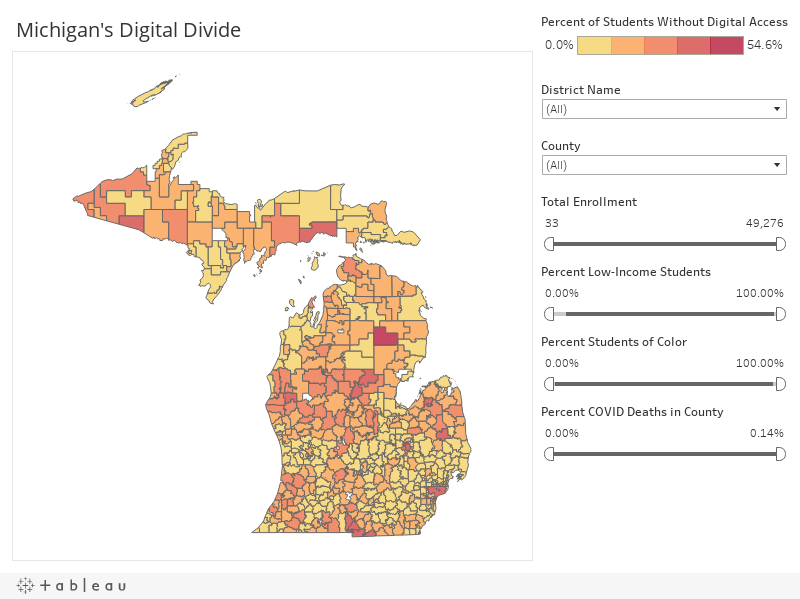 “Getting a better picture of who has coverage and who doesn’t is a critical first step to closing the Digital Divide in Michigan,” Tremaine Phillips, a Michigan Public Service Commission member told the Cadillac News. “It is important to identify where there are unserved or underserved households, businesses, and communities in our state so that internet providers in partnership with community leaders are empowered to commit resources and make investments where additional broadband access is needed most.”

Morton and the Leland Township Library have been trying to obtain wireless hotspots that they can loan to residents, but report having trouble getting enough of the hot-ticket items, as many other school districts and libraries across the country are attempting to do the same.

“I think there’s a big back order on those,” Morton said.

Up in Leland, the internet isn’t filtered, making it more difficult for them to obtain grants to increase internet access, he added. So while students have the devices, they don’t have the service.

DON’T MISS: Keep Going Michigan: How to Reach Your Representative During a Global Health Emergency

President Donald Trump does not have a national plan to address internet infrastructure faced by states like Michigan.

In the absence of federal leadership to address the growing issues caused by the lack of broadband access, local government leaders have stepped in with new initiatives.

Gov. Gretchen Whitmer said that creating fair and equal access for every Michigander “to compete in the 21st century” as she announced a $12.7 million investment in projects across the state to increase broadband internet access at the North American International Cyber Summit last month.

“In today’s society, the fastest way to create an even playing field for all is access to high-speed internet,” Gov. Whitmer said. “These broadband internet projects, along with additional infrastructure initiatives we are undertaking, will provide underserved communities in Michigan with high-speed internet service. This critical service is no longer a luxury but is a necessity that allows every Michigander to get a quality education and compete in the global economy.”

Under the state’s latest tech initiative, Michiganders who lack access to broadband or cannot afford a home broadband connection are unable to participate in virtual activities like telehealth, online learning, telework, and civic engagement.

The move builds on the recent launch of the Connecting Michigan Taskforce that  Lt. Gov. Garlin Gilchrist is helping to lead.

Gilchrist shared with The ‘Gander this year that his dream is leaving a legacy of connection for all Michiganders.

“When I worked as a community organizer, it was all about connecting people to their power,” Lt. Gov. Gilchrist said in a summer 2020 interview with The ‘Gander. “The internet is the most enabling and empowering infrastructure that we can invest in.”

The Connecting Michigan Taskforce will advise and assist state leaders with ideas for increasing internet access for Michiganders.

“This taskforce will provide a coordinated state of Michigan approach to increasing broadband access and adoption in Michigan and finding the resources that are vital to providing affordable broadband access to households and businesses statewide,” Gilchrist said in the announcement.

Taskforce members include representatives from the Michigan Economic Development Corporation, Department of Technology, Management & Budget, Department of Labor and Economic Opportunity, and several other state agencies.

“Having complete and reliable data is key to making that possible,” Phillips said.

Visit www.michiganbusiness.org/broadband for more information on the Connecting Michigan Taskforce.

Ellen Chamberlain is The 'Gander's multimedia content producer. She is a seeker and sharer of truth.

Michigan Life How Do I Build a Native Plant Garden in Michigan? A Beginner’s Guide

Michigan Life Before They Were Famous: Michigan’s Role in Shaping 7 Celebrities

Get exclusive Michigan stories & news right in your inbox