In Part 3 of the Legislative Loophole series, we investigate Let MI Kids Learn’s proposal. It takes from public tax dollars and public education, and gives Michigan’s wealthy residents 100% matching tax breaks for donations. In its first year, it would take an estimated $500 million out of the state budget.

ICYMI: Let MI Kids Learn filed their petitions with the Bureau of Elections on Aug. 10. The deadline for making the 2022 ballot was June 1. However, if those petitions are validated by the Board of State Canvassers, they’ll still qualify for an indirect initiative passage by the Legislature, skipping the voters—and a veto—entirely.

Ideas like Let MI Kids Learn are being supported by a majority of the Republican candidates for state office this year. Although it may seem like it’s losing steam, we’ve watched the DeVos coalition reinvent this concept too many times over the past 20 years to think a missed deadline will slow them down.

Let MI Kids Learn says they work by allowing individuals and corporations to donate to Scholarship Granting Organizations (SGOs). Those nonprofit SGOs then award scholarships to qualifying students to use for things like private school tuition, special needs assistance, or school supplies like laptops. This isn’t cash—it’s funding for program-approved educational expenses sold by program-approved vendors.

According to the Education Data Initiative, the average tuition for a private elementary school in Michigan is $8,250. It’s $19,810 for secondary schools. According to the US Department of Education’s Special Education Expenditure Project, the average expenditures for a student with disabilities was $12,474—and this was using data from 1999-2000, but it’s still the department’s best estimate. Adjusting for inflation, that’s $21,885.36 for one student with special needs, for one year. 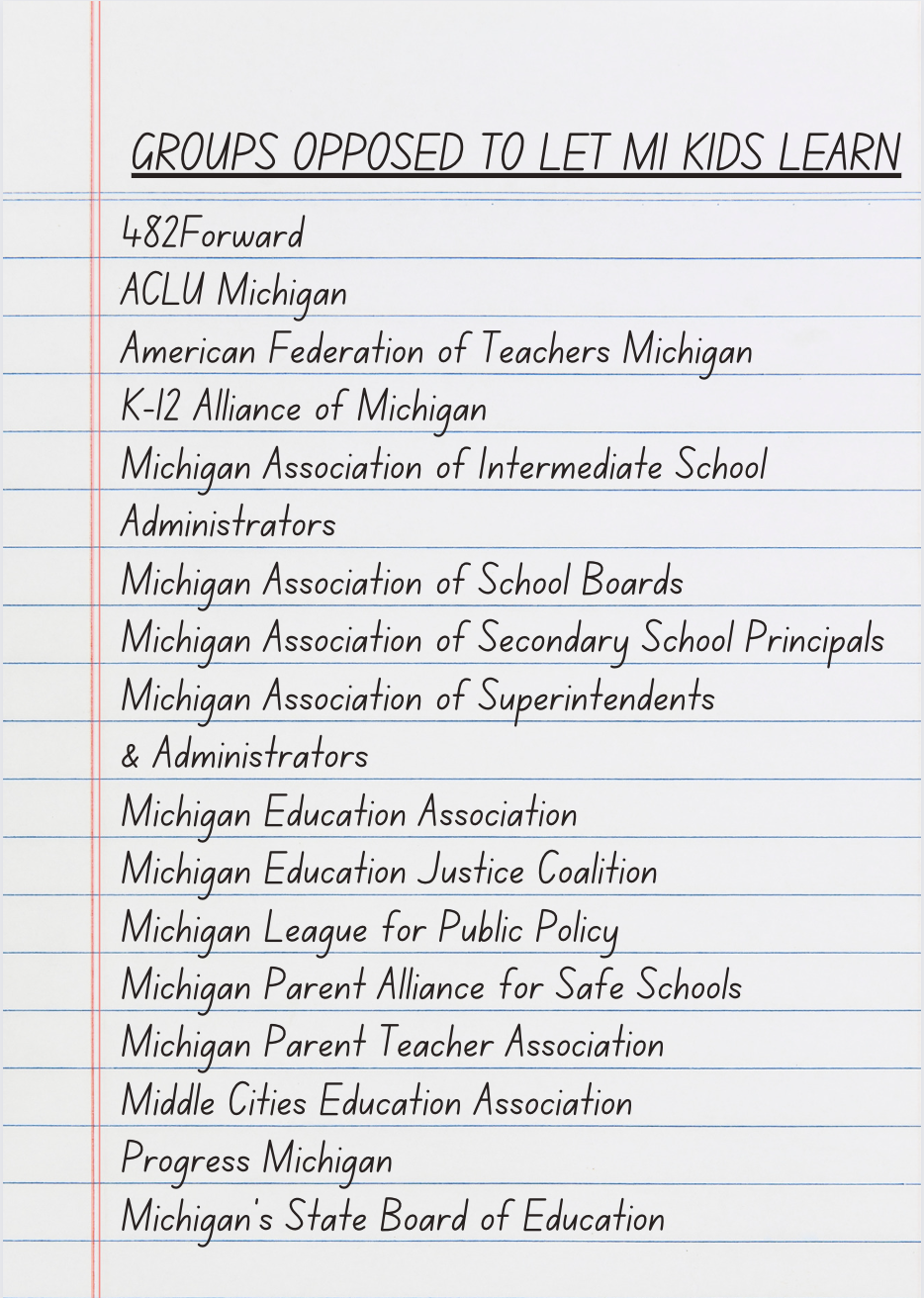 For Sarah Winchell Lenhoff, a professor in Wayne State University’s College of Education, this program is “doubling down” on parents using public money to advance their own children’s educational opportunities.

“What we know from decades of research on school choice and moves towards these sorts of models,” she said, “is that they tend to benefit the most advantaged kids.”

In addition to the cost of private school tuition—which, to be clear, would not be fully covered by the Let MI Kids Learn “scholarships,” there are other extenuating factors that determine whether a student is able to attend a private school.

Lenhoff said some parents may not be able to afford or provide transportation. According to the National Coalition for Public Education, there are also expenditures like books and uniforms. Additional costs for private school education can ring up to $3,700 on average, according to the Education Data Initiative.

There’s the further issue, Lenhoff said, of private schools being selective about which students they accept.

Those individuals and corporations who donate to Let MI Kids Learn’s SGOs can claim a tax credit on up to 100% of their donations. In its first year, the program’s cap is $500 million, with a 20% increase in the following years. Credits could be carried forward to offset taxes every year until the credit is used up.

He said all this program will do is take away money from public schools when they need it most.

“Our schools are already facing a growing educator shortage, as well as many other issues,” Morgan said. “This voucher proposal would only make the problem worse.”

Let MI Kids Learn would not only take away funding from public schools on the front end, but the initiative’s private and homeschool incentives would mean fewer kids in Michigan’s classrooms on “Count Day,” the day when the number of K-12 public school students across the state are counted to determine how much funding schools get. Even a 1% decrease in enrollment would reduce K-12 funding by an estimated $124 million.

Eaton Rapids Public Schools superintendent Bill DeFrance said he’s on the fence about alternative schooling options, like charter schools. But he doesn’t like that when these proposals come up, they’re one-off plans that don’t make up for the revenue loss.

He said he would like to see the state introduce a 10-year package to account for revenue loss to keep public school funding consistent.

But, DeFrance said, he believes those behind the Let MI Kids Learn proposal, like Betsy DeVos, have defunding public schools as one of the intended goals of their proposal.

“[DeVos and her supporters have] been trying for decades now to privatize our schools and make profits off the backs of Michigan students,” he said. “They don’t really care about the educational outcomes for our kids.”

THE KIDS WHO ARE LEFT BEHIND

When they came back to the classroom from the pandemic lock-downs, DeFrance noticed that students’ social and emotional development seemed stunted compared to a normal school year.

“We had kids that had just a partial year with us in kindergarten,” he said. “They’d come back in second grade. So you can picture a lot of those skills were unlearned.”

DeFrance said that schools act as a “social correction point,” for students, where they learn to do things such as getting in line and leaving places in a timely manner.

To provide the support that students were needing, Eaton Rapids Public Schools put some of its federal funding into reducing class sizes and providing more counselors.

DeFrance said that if they lose funding, they’ll have to gradually increase class sizes back to pre-pandemic levels.

“Which I don’t think, right now, is healthy,” he said. “Either for staff or kids.”

If funding is cut right now, he added, it would be the exact opposite of what students need.

Lenhoff, the Wayne State professor, put this into a broader context.

“If a student leaves the system or certain funding is cut from the system, that doesn’t mean that the cost of running that public school system suddenly decreased by that same amount,” Lenhoff said.

Public schools are still expected to run at the same level as funding fluctuates, she said. Regardless of funding, public schools must meet standards and benchmarks set at both the state and national level.

While some things, like class sizes, can be adjusted, there are other expenses that the school cannot reduce. For example, the Eaton Rapids Public School District covers 125 square miles, much of which they have bussing for. DeFrance said about 10% of their budget goes towards this.

Those who are left behind by Let MI Kids Learn would find themselves in increasingly underfunded schools. What’s worse, those are the kids who are statistically more likely to be economically disadvantaged, culturally deprioritized, or have special needs. Also keep in mind: Public schools aren’t just about education.

“Families rely on them for all kinds of things,” she said. “Including nutrition and health services, and support connecting to other social benefits.”

“I just think there’s more evidence now than ever that schools need to be well-funded so that they can serve the role that society’s asking them to serve well,” Lenhoff said. “Instead of taking money away from them and making their jobs even harder.”

In Michigan, the use of public dollars for private education of any kind is banned in the state’s Constitution. And in 2000, voters rejected an amendment that would relax that ban. But a lawsuit is currently pending challenging the 1970 constitutional amendment, and you’ll never guess whose money is tied up with the plaintiffs.

The DeVos-backed Mackinac Center is representing Jill and Joseph Hile, Kalamazoo parents who claim the amendment amounts to religious discrimination. A recent US Supreme Court ruling added fuel to this fire, finding that the state of Maine cannot exclude religious schools from a taxpayer-funded program that pays for private school tuition in areas of where no public high school is available.

If the Hiles win their case, they’ll blow the door wide open for DeVos and her allies.

What can be done about this? That’s Part 4.

Kyle Kaminski Kyle Kaminski is an award-winning investigative journalist with more than a decade of experience covering news across Michigan. Prior to joining The ‘Gander, Kyle worked as the managing editor at City Pulse in Lansing and as a reporter for the Traverse City Record-Eagle.

Hope O'Dell Hope O'Dell is a reporter who seeks to show Michiganders how we got to where we are today. Their experience includes working at FRONTLINE PBS and reporting on city government for the State News.

Isaac Constans Isaac Constans is a multimedia journalist traversing Michigan to tell stories of the economy, environment, and education systems — all with a human-centric lens. His experience includes working as a producer at WKAR in Lansing and covering government workforce and technology in Washington, D.C.

Family Top 10: Most Popular Baby Names for Boys and Girls in Michigan

Get exclusive Michigan stories & news right in your inbox